Audrey Hepburn : The Mosley Connection.
Audrey Hepburn was born on 4 May 1929 in Ixelles, a municipality in Brussels, Belgium. Her father, Joseph Victor Anthony Ruston (1889–1980), was a British subject, and her mother, Baroness Ella de Heemstra (1900–1984), was a Dutch aristocrat. They married in September 1926 in Jakarta. Audrey Hepburn’s parents were Nazi sympathisers and members of the British Union of Fascists. Ella was friendly with Unity Mitford and encouraged her rabidly anti-Communist husband to join the B.U.F. As the B.U.F. grew in strength, the Hepburn-Rustons were openly involved in its fundraising and recruitment. The following article from Blackshirt, called The Call of Fascism was written by Baroness Ella de Heemstra in April 1935. 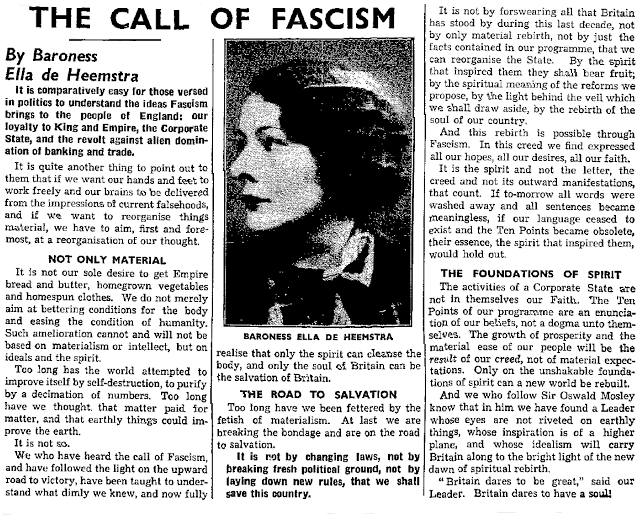 Article by Ella de Heemstra in the Blackshirt, April 26, 1935

A few weeks after this article was written, in May 1935, Ella and her husband joined Mosley’s BUF delegation to Germany to observe conditions under the Nazis. They toured autobahns, factories, schools and housing developments, and had the honour of meeting Hitler himself at the Brown House headquarters in Munich. A group photo taken there – showing the Hepburn-Rustons with Unity Mitford, her sister Pamela, and others – was long enshrined in a silver frame on Ella’s mantelpiece. Almost immediately, after their return from Germany, in that same month of May, 1935, Ruston walked out on his wife and six-year-old daughter, Audrey.

At that time, he was very active in the Belgian fascist party, the Rexists as well as the BUF. He would soon divide his time between Belgium and England. Audrey remembers her mother sobbing for days on end, mourning the loss of yet another husband (Ella had been married before). But Ella must have recovered herself fairly quickly because, four months later, she was back in Germany with the Mitford sisters, this time, to witness the military pageantry of the 1935 Nuremberg Rally.

Unity and Diana at the Nuremberg Rally in Germany

Upon her return, Ella wrote an editorial in The Blackshirt, extolling Hitler’s virtues. The article is called At Nuremberg.

Article by Ella de Heemstra in the Blackshirt, October 11, 1935

In 1939, Ella, now divorced, moved with Audrey to Arnhem, the Netherlands, where her parents lived. Ella’s  father, Baron van Heemstra, had been the mayor of Arnhem from 1910-1920. Then, in May 1940, the Nazis invaded the Netherlands. Ella and Audrey would spend the entire war years in Arnhem. Ella liked to drink and she liked to have a good time. She openly fraternized with the German officers, inviting them into the family home, and going out with them in their cars, even crossing the border and driving into Germany for entertainment.

Once she organized a cultural evening in Dusseldorf, Germany, along with the regional head of the NSB (the Dutch Nazi Party). The illegal press of the Dutch Resistance suspected the Baroness of being an agent for the Gestapo (the Nazi secret police).

She worked for the German Red Cross in the Diaconessenhuis (hospital) in Arnhem, nursing wounded German soldiers. Before the war, Ella had displayed a Nazi swastika and a German eagle on the wall of her house in Arnhem. [1]

After the war, with the BUF now banned, Ella concentrated her energies in forging ties with people who could further her daughter Audrey’s career in becoming a prima ballerina, then a model, followed by a film star. They lived in Amsterdam for a time and then The Hague before settling in London. Meanwhile, after walking out on his family in May 1935, Audrey Hepburn’s father had become involved in a corporation with financial ties to the Third Reich. In 1938 he was being investigated by both the Belgium Parliament and the British House of Commons: Mr. Joseph Ruston, a director of the European Press Agency, Ltd. was alleged in the Belgian parliament to have received £110,000 from German industrial chiefs in close touch with Dr. Goebbels to publish an anti-communist newspaper.” [2] His two business partners at the European Press Agency were a Nazi lawyer and a member of the Gestapo. 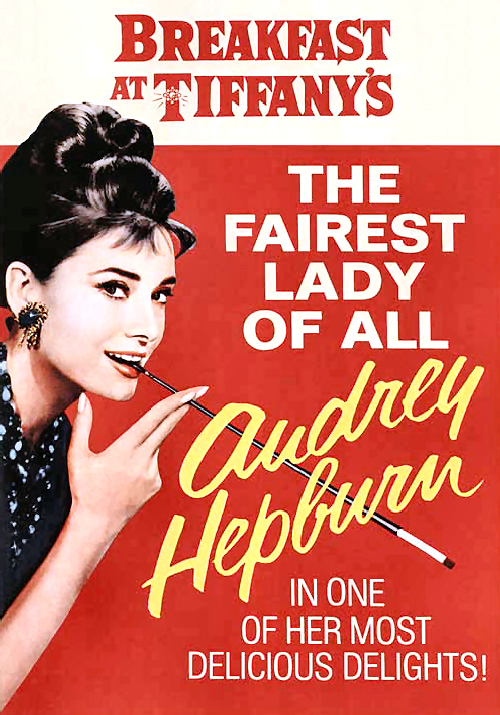 Shortly before the start of the Second World War, Joseph was living in Regents Park, London. An announcement in the London Gazette, dated April 21, 1939, has him adding the surname Hepburn to his own. It had been the surname of his maternal grandmother’s mother and he believed its lineage to be of some standing.

As to whether he thought it might help him prove his Britishness during the impending storm about to hit Europe is unclear but it does prove that Audrey didn’t just pull the name out of a hat to help her career, as has been suggested in some quarters.

In June 1940, the Battle of Britain had begun, and England was at war with Germany. Joseph was arrested under Defense Regulation 18B, as he was considered an enemy of the state for his membership of “The British Union of Fascists and as an associate of foreign fascists.” [3] He was interned on the Isle of Man for the duration of WWII, after which he settled in Ireland. 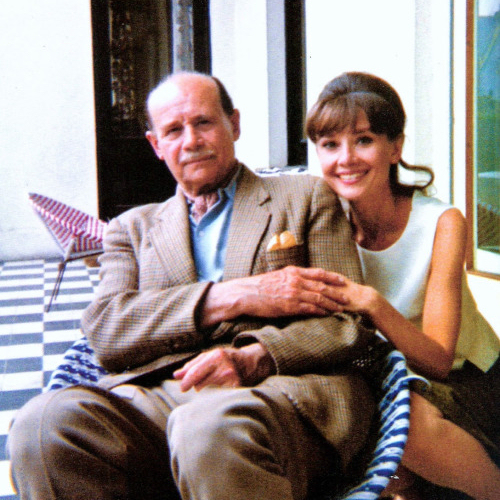 Audrey Hepburn with her father in 1964

The Film Star and her Fascist Father: The Independent.
Dalley, Jan. Diana Mosley: A Biography of the Glamorous Mitford Sister who Became Hitler’s Friend and Married the Leader of Britain’s Fascists. New York: Alfred A. Knopf, 2000.
“At Nuremberg,” The Blackshirt, October 11, 1935.
“The Call of Fascism,” The Blackshirt, April 26, 1935
Audrey Hepburn: A Biography by Barry Paris, Paperback– 2 Feb 1998

This article reproduced by kind permission of Britannia 18th December 2015