Shortly before he died, my old friend Eric Hamilton Piercy asked me to set down the story of the small part we played in the rescue of the British Expeditionary Force from France in 1940 as many inaccurate versions had been told over the years.

I knew Eric from my days as fellow Blackshirts at Black House, the BUF National Headquarters in Chelsea, and later in the1930s Eric became my Personal Secretary.

We were both fond of boating and in 1939 I decided to buy a motorised craft. Eric told me of a BUF motor boat that was surplus to requirements. I bought the ‘Advance’ for a Fiver and although it needed a coat of paint, the engine was soon in perfect running order. We spent many weekends aboard it venturing as far from our moorings at Teddington as the Isle of Wight and Poole Harbour.

The call goes out – Rescue our Boys at Dunkirk!

When the call went out in the Spring of 1940 for small boats to help bring back troops of the beleaguered British Expeditionary Force in France, we immediately set sail for the rendezvous point at Sheerness. We became part of the first flotilla of six motor boats to reach Dunkirk and the ‘Advance’ had the distinction of being the very first to take war-weary British troops off the beach.

Our task was to ferry troops from the shore to the large Royal Navy vessels standing by off the coast and that afternoon we made twenty return journeys and transported a total of around 500 men. Of course, German dive-bombers were constantly strafing us and everything else in sight that moved. One of them flew so low over us that it clipped the top of our mast clean off.

It has been reported that Eric was wounded in this action but this is incorrect: we were only hit by splinters caused by machine-gun fire hitting the ship and they did little personal damage. However, one bomb did land close by causing the ‘Advance’ to shoot up at least ten feet above the water – but fortunately we landed the right way up!

The lowest point was when we saw one of the large Royal Navy ships, on which we had landed some of our rescued troops, blown to pieces by a direct hit. Few on board could have survived.

By now four boats from our original flotilla of six had been sunk and the machine gun fire and shrapnel had severely damaged the ‘Advance’. We were instructed by the Lieutenant in charge to head for home immediately. The hazardous return journey through mist and floating mines was safely completed with just a single gallon of petrol remaining by the time we made landfall.

Our reward: Arrest under 18B!

It has been said that the police were waiting at Dover to arrest us under Regulation 18B but this is not quite true. On our return we were given a day’s recovery time whilst the ‘Advance’ was patched up ready for another sortie on the Monday. In fact they came for us on the Sunday at Eric’s house in Sussex whilst we were still picking the splinters out of our flesh. We were arrested in the garden in front of his wife and children as potential traitors who would most likely sabotage the war effort given the chance! 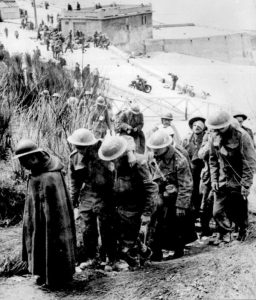 t has to be said that the Regulation 18B Advisory Committee were much impressed by the story of our service at Dunkirk and even the normally hard-line MI5 did not object when our release from Internment was recommended after about 90 days in prison.

Shortly after, we received an official certificate recording our actions aboard the ‘Advance’ and helping with the rescue of the BEF at Dunkirk – plus a cheque for £10 each!

What Eric and I did on that day was no more and no less than hundreds of other small boat owners. But our internment demonstrates the corrupt nature of a perfidious  British Government that labelled as traitors and fifth-columnists patriotic  men and women who would make any sacrifice to defend the country that they loved.