Wilfred Risdon was born in 1896 in Bath, the last of ten surviving children of a bespoke boot & shoe maker father, and shoe machinist mother, who died when Wilfred was fifteen. The family was probably conventionally Christian in religious persuasion, but at some stage, they became adherents of the Plymouth Brethren, a strict, somewhat puritan sect. According to a nephew, Wilfred was known to have been something of a religious zealot in his youth, always carrying a bible, from which he was wont to quote.

By 1911, he had already left school, and the census shows his occupation as apprentice bookbinder; two of his elder brothers had followed in their father’s choice of trade, but Wilfred evidently decided to go his own way, although this was relatively short-lived. It is unlikely (but also not impossible) that local union & political activism persuaded him to change course, but he decided to become a coal miner, probably starting in the local mines around Radstock / Midsomer Norton, before long being lured to south Wales by the promise of higher wages, as were many men from that area. He is known to have lived & worked in Tredegar, where he encountered a local union firebrand, Aneurin Bevan. Wilfred might well have made his mark in the South Wales Miners’ Federation (SWMF), had war not intervened in August 1914.

Wilfred spent the majority of the war in the Royal Army Medical Corps (RAMC). If this was his choice, his reasons for doing so are unknown, but it is plausible to speculate that his strong Christian principles influenced his decision to help save lives, rather than willingly take them. When the war ended, although he had received injuries, he went into Germany with the Army of Occupation. During the war, he had apparently been a contender for a place at the Labour College in London, sponsored by the SWMF, which he would presumably have taken up at the end of his war service, but he was in competition with Bevan, and history shows that Bevan was awarded the place.

It is not known for sure what Wilfred did immediately after the war, but it is most likely that he went back to mining and union work, gravitating toward national politics, quite naturally with the Socialists. By 1924, he was a local organiser for the Labour Party, living with his elder brother Charles in Weymouth. He contested the seat for the Labour Party in that town (Dorset South constituency) in the second 1924 election, but for all his enthusiasm, it was a forlorn hope in an area of such entrenched conservatism. By this time, he was also working with the Independent Labour Party (ILP), and not long after his election defeat, he became the south west regional organiser, and later on, Midlands Divisional Organiser for the ILP.

During this period, he met the most influential person in his life: Oswald Mosley, who by 1926 was MP for Smethwick, on an ILP ticket. Mosley was rocking the boat with his radical ideas, which didn’t always sit well with the comfortably sinecured union men, but Wilfred was one of the dissatisfied ex-servicemen to whom Mosley’s impetus for social change spoke directly. By 1931, Mosley had decided to go it alone and form his own political party, and Wilfred was sufficiently committed to leave the ILP and join Mosley in the New Party, becoming a regional organiser in the north east of England. Unfortunately, the New Party was short-lived, and with its demise, Wilfred was left somewhat high & dry, but nevertheless undaunted. He survived as best he could by running an advertising agency, but all the while maintaining his political contacts. When he received the call from Mosley, with his plans for the British Union of Fascists, he didn’t hesitate, becoming a founder member.

It took him a few months to settle his affairs, but by February 1933, Wilfred had become Mosley’s first Director of Propaganda, at National Headquarters. The history of the BUF is very well documented, but during its existence, Wilfred held several different posts in the top echelon of the Party. He was supplanted in his tenure as DoP by the unashamedly ambitious William Joyce, although this naked ambition and divisive personality was uncomfortably apparent by 1937, when he and John Beckett were dismissed by Mosley. Wilfred was also an extremely effective recruiter for the Party, and his success in the cotton manufacturing areas of the north west of England made the Labour Party distinctly uncomfortable. However, he was arguably most effective in the art of communication, and he probably took most satisfaction from educating Party members in electoral matters, and training speakers and electoral organisers.

After the consistent and cumulative successes in the heartland of support which was the East End of London, there is no reason to suppose that the Party might not have made a good national showing in the general election that was scheduled for 1940, but as early as 1938, the election was looking increasingly unlikely if a war were to break out. It is impossible to be sure when Wilfred started thinking that his electoral work with the Party was becoming futile, but by the middle of 1939, he had decided to leave the Party and go to work for an anti-vivisection organisation, albeit in a non-executive capacity, most likely as a result of his association with activists such as Norah Elam (also known as Dacre-Fox). He stayed on unpaid at headquarters until August, helping to organise the great Earls Court Peace Rally, but by the time the war started, he was working full time for the London & Provincial Anti-Vivisection Society.

Wilfred’s talent for organisation was immediate from the outset, but his progress was interrupted by the enactment of Defence Regulation 18B(1A) in May 1940, when he was interned as a fascist sympathiser without charge or trial, even though he was no longer a member of British Union. His conduct at the Appeal Hearing in July 1940 was sufficiently persuasive for his release to be recommended, and by August he was back home, but without a job. However, the LPAVS agreed to take him back, and within a few months, he was on the committee. By this time, the influence of the Elams was waning, and from then on, Wilfred’s rise was inexorable. He became Secretary, and by 1956, he had persuaded the organisation of the logic of amalgamating with the larger, also London-based, national ‘parent’ antivivisection organisation, the National Anti-Vivisection Society.

This became effective at the beginning of 1957, when Wilfred took over as Secretary of the merged and highly influential organisation. He was in that post for ten years, during which period, in addition to much lobbying and campaigning, he guided the Society into a change of headquarters, moving it to the heart of the medical establishment (and arguably their main ‘enemy’), Harley Street. Unfortunately, his tireless work took its toll on his health, and in March 1967, he suffered a fatal heart attack at work. He left behind a widow, Margaret (known as Nellie), a stepson, Brian, and a stepdaughter, Sheila. 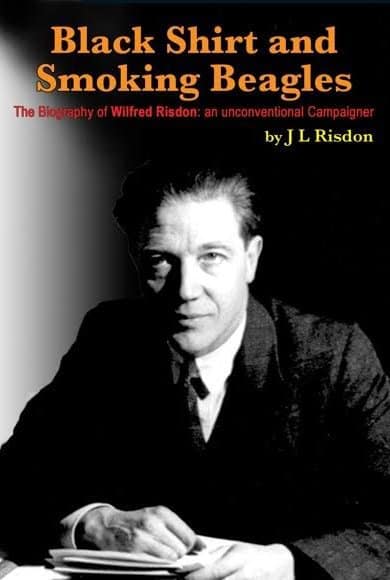 This is the true story of a man who refused to be bound by convention, if that meant accepting the status quo of the lower orders knowing their place, financial slavery, freedom of speech only for those in ‘authority’, and the unquestioning acceptance of unspeakable cruelty to animals. He was a valued and trusted lieutenant for Mosley, and rose to become Secretary of the most prestigious animal welfare organisation in Britain: the National Anti-Vivisection Society. Yet he is not a household name: this book sets out to redress that omission.