Living Life in the Fast Lane.
A fascinating and well researched study has been completed on the legendary ‘Queen of Speedway’ Fay Taylour – the world’s most successful woman motor sports competitor – who as Prisoner 4634 was detained for over three years under Regulation 18B because of her opposition to War and her support for British Union.

During the 1980s, the author came into possession of a collection of letters written by Fay to Ralph Reynall Bellamy, the last Director of Propaganda of British Union, and these give new insight into the personality and motivation of a woman who thrilled thousands of spectators in a racing career that spanned four decades.

Fay Taylour, the daughter of a British Army Officer, was born in Ireland and began her motorcycle racing career aged 22 in spectacular fashion when she beat Australia’s leading male rider to win the then astronomical sum of £1500 in prize money. She was the first woman to race in speedway in the UK and won many gold and silver medals in a sport fraught with danger: at least 24 riders lost their lives whilst competing in the 1930s in this country alone. The danger was one reason why during the inter-war years ‘dirt-track’ racing rivalled football as a spectator sport not only in the U.K. but in Australia and New Zealand. Before long Fay was competing throughout Europe and the Empire – wherever she rode she drew record crowds and regularly received huge ovations. This was as much due to the fact that she was a woman competing in what had until then been a male preserve as for her superb riding skills.

She also had a natural flair for publicity – even to the point of matching her make-up to the livery of machine she was riding. When not thrilling audiences on the tracks, Flo was promoting herself in interviews on radio and in newspaper and magazine articles in which she strongly advocated that women should race on equal terms as men. 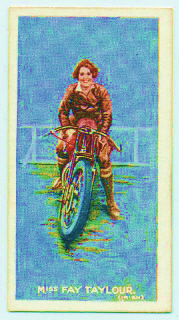 One of Fay Taylour’s most demanding races was a 6-day motorcycle crossing of the Bavarian Alps in 1929 in which she won a silver medal. It was shortly after this that the organising body of British motorcycle racing banned women riders. But this didn’t stop Fay – she simply switched to four wheels and was soon racing at Brooklands where she clocked up a fastest circuit time. Fay also competed in the Monte Carlo Rally and RAC Rally.

When women were also banned from motor racing in the UK, Fay moved on to compete in Australia, New Zealand and Germany. In the latter country, where she drove an Adler, she was deeply impressed by the social progress made under National Socialism and acquired many new friends closely allied to the party. One of these arranged for her to broadcast on motor racing to South Africa, an innocent event that was to be used against her some time later.

Fay remained in Germany until late 1939 but left shortly before the outbreak of war. After competing in the South African Grand Prix she returned to the U.K. where it became her practice to denounce the war loudly in restaurants and other public places. This resulted in her being visited and questioned by two Special Branch police officers in October 1939 who asked her if she was a member of British Union? Her response was in keeping with her character: she replied that she wasn’t but now intended to join that very day. She was as good as her word and immediately signed up at the Marylebone branch of British Union, under District Leader George Pratten*, and put herself at the disposal of the peace campaign. This was not what the visiting police had intended and she was immediately subjected to MI5 surveillance from that moment on until 1976.

The War on Want is the War we Want!
Working closely with Olive Hawks and Charlie Watts, the Head of the 1,000-strong British Union Cab Drivers Group, Flo pinned the British Union circle-and-flash badge prominently to her lapel and embarked on a hectic campaign of distributing leaflets such as ‘The British Peace and How to Get it’; actively attending anti-war meetings; and speaking publicly in support of Mosley’s campaign for ‘Peace with Honour, British Empire intact and British People safe’.

She also developed a propaganda stunt whereby a number of BU peace activists would visit a news theatre and proceed to clap whenever British troops were shown – but hiss loudly whenever Churchill appeared! Flo also infiltrated other anti-war groups such as The Link, The Right Club and The Nordic League’.

By the spring of 1940 MI5 knew for certain that no pro-German Fifth Column existed in the U.K. but Maxwell Knight, their officer in charge of surveillance of British Union, was determined to ban the Mosley Movement. This was despite the Home Secretary, Sir John Anderson, telling the War Cabinet as late as May 1940: “Although the policy of the British Union of Fascists is to oppose the war and condemn the Government, there is no evidence that they would be likely to assist the enemy. Their propaganda strikes a patriotic note…in my view it would be a mistake to strike at this organisation…there is no evidence on which such action could be justified”.

However, Maxwell Knight wasn’t going to let a little thing like “no evidence” stand in the way of closing down British Union. One can only wonder on whose instructions Knight was pursuing this aim and was even willing to fabricate evidence to achieve his goal. Flo was detained in June 1940 and spent two years in Holloway Prison and a further 16 months on the Isle of Man. Her broadcast purely on motor racing matters from Germany to South Africa was given as a reason for internment on her arrest warrant and during her interrogation the fact that she had visited Dublin was misrepresented as a mission to enable Mosley to broadcast to the UK from Ireland. These two examples show how desperate Maxwell Knight and MI5 were to fabricate ‘evidence’ against the peace activists of British Union.

Exile to Eire
In an unpublished account of her imprisonment without charge or trial entitled “Your attention is arrested” Flo Taylour describes her stay in Holloway among  “conditions of extreme filth…shortages of soap, cleaning materials and sanitary products all impacted on health including hair loss and skin disorders…in these squalid conditions three women gave birth.”

Knight even placed one of his woman agents, known as Marjorie Amor, in the prison but as everyone knew her true purpose there her mission to collect further ‘evidence’ was a failure. Amor, whose real name was Marjorie Mackie, had been Secretary of the Right Club and was responsible for keeping their membership book up to date. The author suggests that this book, which is today kept in a Jewish archive, could well be a forgery with names added to ‘incriminate’ anybody who MI5 wanted to detain.

At her reviews Fay made it plain that she had not faltered in her beliefs and in 1943 stated firmly: “I have not changed my views on the war”. However, in October 1943 she was released on condition that she lived in Eire and did not return to this country whilst the war continued – even though sending U.K. citizens into exile was strictly illegal and no other modern examples are known.
Fay remained in Dublin until early 1948 when she returned to London shortly before Union Movement (UM) was founded. She lost no time in re-establishing old political contacts and is known to have driven Jeffrey Hamm to and from meetings in a Jaguar car lent to her by a ‘lady of the night’ she had known in Holloway.

The author notes that the real driving force behind UM were younger men and women who reacted to internment with an intensification of their pre-War beliefs. Paradoxically Regulation 18B ensured the re-emergence of the post-war Mosley Movement due to the sense of martyrdom it created.
Taking America by storm.

Before long Flo Taylour once more found the lure of fast cars irresistible and in 1949 she began working at an M.G. and Jaguar showroom on Los Angeles’ Sunset Strip selling cars to film stars.  Her first customer was Clark Gable. She also began motor racing in Los Angeles and Palm Springs where she beat the record set by the fastest male driver and appeared on TV for the first time. But history was to repeat itself once again and race entry forms soon began to carry the regulation ‘No women drivers’.

However, there was no stopping Flo and she turned to stock car racing in Chicago and ‘midget’ car racing where she continued to attract record crowds. With it came further demand for interviews on TV, on radio and in the press. There were even plans for Hollywood to make a film of her life starring Rosalind Russell. But although she was beyond the remit of MI5 the CIA was trailing her everywhere and she was convinced that their intervention caused the sudden cancellation of the film. There was worse to follow.

In 1952 she flew to the U.K. for her father’s funeral but on her return she was refused entry to the U.S. Undeterred she turned to motor racing in Sweden, Australia, New Zealand and South Africa. Nearer home she won the Ladies’ Handicap at Snetterton in a Bugatti and competed in Formula 3 at Brands Hatch. Then in 1955 the U.S. ban was lifted and she returned for another year of racing on American circuits. But even the indomitable Flo Taylour couldn’t win against the slower reaction times that come with age – she was now well into her 50s and she finally retired in the autumn of 1956.

However, she was still considered enough of a ‘celeb’ to appear in the famous TV quiz show ‘What’s my line?’ and remained in the U.S. for another five years.

An inspiration for women in sport
Flo returned to the U.K. in 1971 and began renewing old friendships. Many readers of Comrade will remember her attending UM dinners at which Sir Oswald Mosley and Lady Diana were the guests of honour. She also made contact with Anna Wolkoff and was later instrumental in informing Tyler Kent of her death in a motoring accident in Spain in circumstances that some found suspicious. (Although Tyler Kent was accused of passing ciphers to the Russians in 1940 no evidence to support this was found in Soviet archives after the fall of communism).

The last eight years of her life were spent in rural Dorset where she died in 1983 aged 79 whilst attempting to write her memoirs. There is little to criticise and much to praise in ‘Fanatical Fay Taylour’ though some might question her being described as an anti-Semite without substantiation – and the description of Mosley’s policy of ‘Europe One Nation’ as being “a Nazi idea” is simplistic. Does this mean the European Union is based on a Nazi idea or does European unity only become Nazi when Oswald Mosley advocates it?

The author’s final assessment of Fay best sums up this colourful and strong-willed woman. He describes her as a “brave, action-packed feminist who faced and fought discrimination against her as a woman because sexism blighted her most successful racing. She was an advocate for more women to enter motor sports and was seen as an inspiration and role model for other women.” She considered herself a European Socialist more than anything else and believed in a more equal economic system that could only come when the power of finance was broken by the will of the people.

*During an interview with George Pratten in 1985 he told me that the osteopath Stephen Ward, who played a central role in the Christine Keeler/John Profumo affair, joined his branch of British Union in 1939 because of his opposition to the coming war with Germany.